Wavefront is a way to measure and treat higher order aberrations in the eye. Some people may benefit from this type of lasik. Discuss with the doctor if this is beneficial for you.

The excimer laser is an extremely accurate and advanced instrument that is used for surgery on the cornea. It works by producing a computer guided beam of ultraviolet laser light (193nm) that vaporizes microscopic layers (.25 microns per pulse) of cornea with each laser pulse. When the laser beam is applied to the cornea in multiple pulses of varying shapes and sizes, a precise customized new shape is created on the cornea. In effect, the laser beam is able to reshape the cornea that will allow the treated eye to focus clearly without relying on a lens in front of the eye to focus the picture. How precise is the excimer laser?

When an object, such as the book, is brought within several inches of the eye, rays of light from this object diverge, are converged by the cornea and the natural crystalline lens in an attempt to focus on the retina. To allow this to happen, the human lens will accommodate, i.e. become thicker centrally and optically more powerful causing further bending of the rays of light until they focus on the retina.

Accommodation is a naturally occurring reflex which works fine until the mid 40's when, unfortunately, reading glasses are required to achieve this. The diminished capability of the crystalline lens, by continually increasing in length as it ages, is believed to be related to the way the lens is supported in the eye. At some point, the lens has grown so large that the zonules are no longer taut, preventing the accommodative reflex from occurring.

New Technologies such as scleral relaxing bands and lasers that target this area are under development. Stay tuned for new developments. 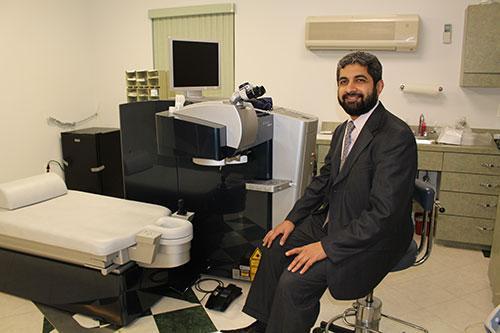